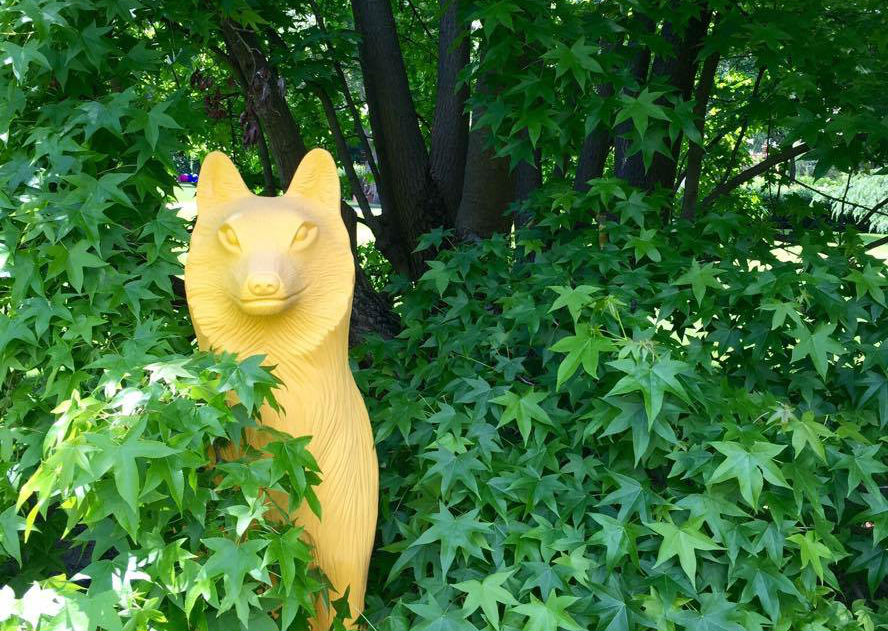 In fairy tales wolves are often described as bad creatures but the story that we are going to tell you today is about a good wolf, born in order to protect a special place.

The origins of Cracking Art wolf are related to Ca ‘del Bosco, one of the most prestigious and trailblazing wineries in Italy, leader in the Franciacorta production field. The winery is characterized by a particular atmosphere generated by the fusion of wine, art and nature: the enchanting scenery blends with the intellectual provocation of contemporary art because of the presence of surprising sculptures that adorn the landscape with their colors.

Thanks to this passion for art the owner of the winery, Maurizio Zanella, asked for a Cracking Art new sculpture, a wood animal that could be a careful guardian of the wine yard and of its enchanting scenery. The name, “Ca ‘del Bosco”, suggested the idea of ​​the wolf, directly associated with the story of Little Red Riding Hood and more generally with the fairy-tale and fable dimensions.

Moreover this animal, a creature full of charm, a source of inspiration for Aesop, Phaedrus, Brothers Grimm until Herman Hesse tales, is able to express the idea of ​​protection and responsibility. It is also the animal more similar to the dog and for this reason it represents the connection between nature and domestic environment, one of the most important themes for the movement.

In this way, from 2010 a pack of 99 blue wolves is placed on the winery roof welcoming the hosts with its elegance. A symbol that has also become the icon of Italian products excellence. From this point of view, it’s important to mention Cracking Art installation at Bastioni di Porta Venezia in Milan for Expo 2015, and then at Branca Collection, in vast spaces of the company historic production plant, from over 170 symbol of the Made in Italy excellence all over the world.

The eye shape, the depth look, the solemn and hieratic profile were inspired by the Egyptian symbology and in particular by Anubis, guardian of the passage between life and death. This is a further aspect that makes the wolf one of the most mysterious and emblematic works of Cracking Art, metaphor of the organic-inorganic process, called catalytic cracking, that inspired the name of the movement.

Finally, the wolf is both an individual and social animal. On one hand it communicates the idea of pack and common action: wolves hunt, breed offspring and defend the territory in an integrated and coordinated way. On the other side the wolf is related to the literary and romantic loneliness and represents the individual strength. This ambivalent aspect alludes to the nature of Cracking Art and its artists, able to work together but at the same time lone wolves who express their creativity also in an independent way.