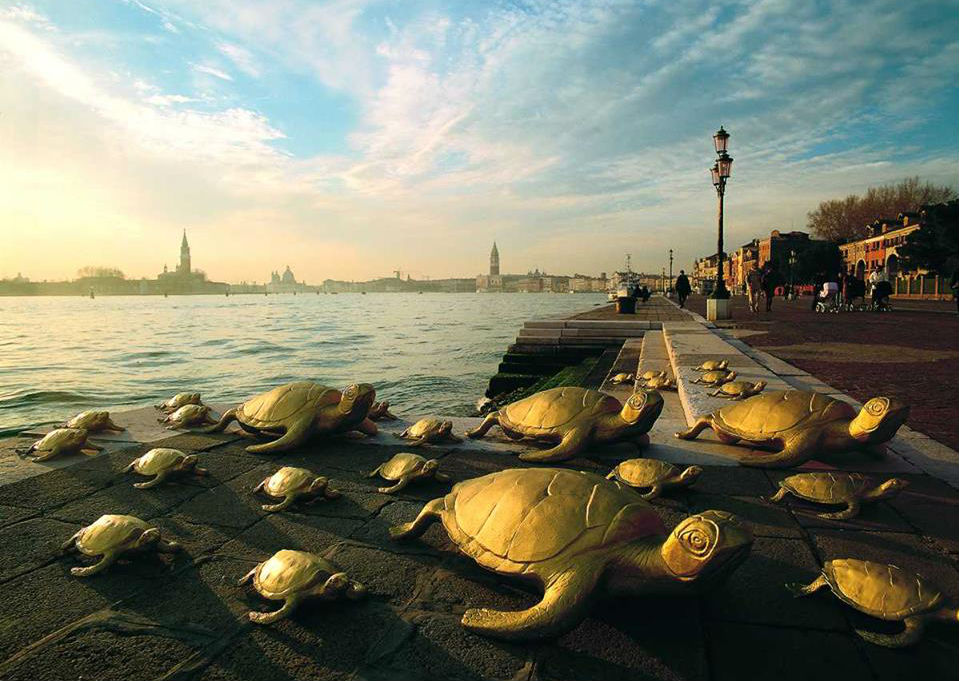 Sustainability and respect for the environment have enlivened Cracking Art movement since its origins.

The issue came up when the artists had to choose the material for the creation of artworks. Plastic is one of the most modern materials, used for the production of several products and also for human body prothesis and nanomedicine.

At the same time plastic is one of the substances which pollute the planet, potentially harmful not only for humans but also for the entire ecosystem.

For this reason, the very first intention of the movement was to associate the installations with a message of recycling and with the desire to give value to the plastic through art.

It was not a coincidence that the first urban installation realized by Cracking Art has been the one of December 1996, when a thousand gold dolphins floated in the air at Arengario di Palazzo Reale in Milan: an initiative organized thanks to the collaboration with Replastic Consortium, born at this time in order to raise awareness on plastic materials.

Later, many other initiatives have seen Cracking Art collaborating with organizations for nature protection. And also the artworks took life with the idea of ​​respect for the environment.

The dolphin is the first animal created by the artists. It has a strong ecological meaning: despite being among the most beloved animals it is often threaten by the constant danger of plastic dispersion in the sea.

Also the turtle, often victim of pollution, is one of the beloved animals. How can forget the invasion of 500 gold turtles at Biennale gardens? The initiative entitled SOS WORLD took place in 2001 and it was one of the most important moments in Cracking Art history.

Another animal related to environmental issues is the penguin: its survival is related to the problem of global warming and ice melting. Despite being appreciated by a lot of people, this animal is constantly endangered by human technological progress that brings wellness to man but damages the planet.

The idea of ​​Cracking Art was to use the animals in order to focus the attention on an issue that twenty-three years ago was not so common. A real innovation for the period.

Later the popular consciousness has changed, there is more sensitivity on these issues and Cracking Art has decided to open up to other themes, keeping an eye on ecology and environment.

For this reason Cracking Art works can be regenerated, chopped and recycled in order to produce other artworks. A real cycle of life to affirm that in art as in nature nothing is created and nothing is destroyed. But everything changes and becomes artwork.