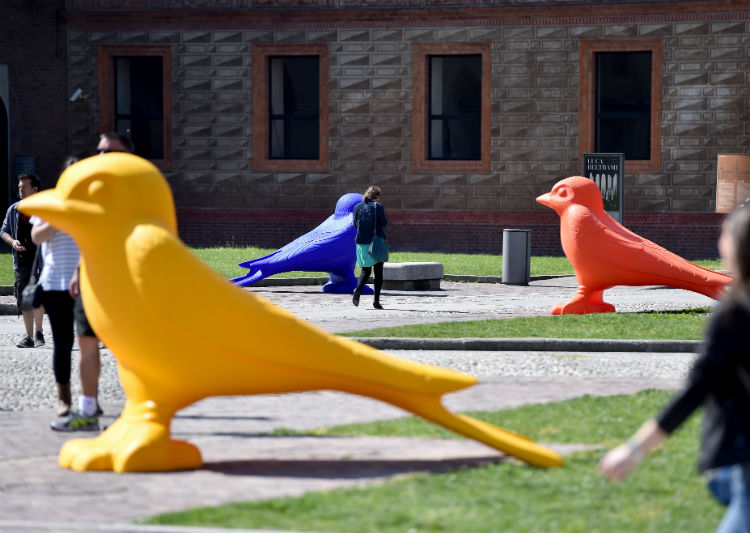 The swallow is one of the last Cracking Art creations: what about its origin and its meanings?

The swallow sculpture was born during the spring in 2014 and the idea came from the need to create a new Cracking Art animal that could be a symbol of Regeneration which is the main inspiring concept of the movement.

The swallow, in fact, is always associated with the awakening of nature and the ideas of rebirth and new life. The swallow stands also for journey and freedom and, building nests on residential roofs, it suggests the idea of cohabitation with humans. By the way the direct connection with people doesn’t change the wild nature of this animal: having a cautious attitude, it always prefers to keep a distance from the ground. From this point of view it was significant the Cracking Art choice of representing the animal standing up on the ground instead of flying in order to establish a spontaneous and playful relationship with humans. The swallow is also a migratory bird bringing popular beliefs and different cultural traditions and so it is also a symbol of dialogue and sharing ideas.

The swallow sculpture appeared for the first time in a Cracking Art exhibition at Castello Sforzesco of Milan during the period of Salone del Mobile in 2014: the exhibition of colorful giant swallows was followed by a fund-raising promoted along with Italia Nostra Foundation in order to restore the equestrian statue of Bernabò Visconti placed at the entrance of the Castle Museum.

In this way the swallow for Cracking Art is not only a metaphor for the regeneration of nature but it is also a symbol of rebirth for the urban context and the monumental artistic heritage.